Customise your confetti cannon with your own personal mix of colours.

Create a unique experience with confetti to match your theme using our simple, three-step guide.

Gender reveal party cannons are the on-trend way to share your exciting news in a fun and spectacular way with friends and family alike.

With your guests gathered in anticipation, our gender reveal cannons create a stunning display of colourful confetti to answer the question on everyone’s lips – is it a boy or a girl?

We carefully load our cannons with a mix of light and dark pink or blue confetti and then seal them up with a cap displaying a big question mark on a pink and blue swirl.

There are no colours mentioned on the outside of the cannon to spoil the surprise for any eagle-eyed rellies trying to get a sneaky peek before the big moment. With a discrete code on the bottom of the cannon, only you know what’s inside!

Our gender reveal cannons shoot a burst of colour up to 8 metres, creating a stunning cascade of fluttering confetti at your reveal party. They are available singularly or, if you want to keep the effect going and capture the perfect photo, we have a special offer pack of 4 which includes free delivery.

The confetti is fully biodegradable, so our cannons are perfect to mark the moment in a fun and memorable way, both indoors and out. There’s only a pop when they fire, so no need to worry about scaring kids and grans.

So, when you see that first glimpse of your baby, and they’re not keeping it a secret from you too, let everyone know your news and celebrate in spectacular style with gender reveal confetti cannons. 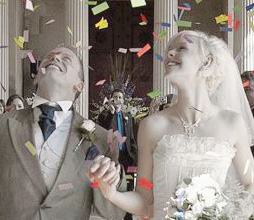 Can’t find the colour you want?